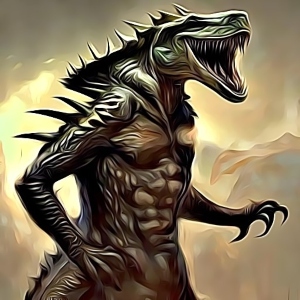 Use this Lizardfolk Name Generator to find countless random lizardfolk names for your next gaming adventure, story or any other kind of project. Enjoy!

What are the Lizardfolk in fantasy?

Lizardfolk are one of the most popular races in fantasy games. They are often depicted as reptilian humanoids, and are known for their physical strength and agility. Lizardfolk are also usually proficient in unarmed combat, and many of them use weapons such as spears and clubs.

Lizardfolk are native to warm climates, and typically make their homes in swamps or jungles. In some stories, they are also said to live in underground caverns. Many lizardfolk tribes are nomadic, moving from place to place in search of food or new territory.

Lizardfolk are often feared and misunderstood by other races. They are often seen as nothing more than savage beasts, but there is much more to them than that. Lizardfolk can be proud and honorable warriors, loyal friends, and devoted partners.

A history of lizardfolk in fantasy

For centuries, lizardfolk have been a staple of fantasy literature, though their roles and personalities have evolved over time. In contrast to the more basic and benign conception found in ancient Greek literature, lizardfolk have evolved into an iconic representation of monstrous humanoids. In Homer's Odyssey, lizardfolk are first mentioned as strange, monstrous creatures from an island full of monsters. They were able to magically breathe underwater and had unnatural strength. The story's characters couldn't understand them because they spoke in their own strange language. In more recent works of literature, such as D&D and World of Warcraft, lizardfolk have taken on the role of classic reptilian-based humans; being made up of many different subspecies, like the draconian. The lizardfolk of contemporary fantasy literature are frequently depicted as barbaric, primitive savages who frequently worship ancient gods or adhere to primitive codes of honor. Dark and murky environments, such as impenetrable jungles or steaming sewers, are frequently associated with them. The lizardfolk are referred to as "orcs" in Tolkien's Lord of the Rings, but Tolkien never explicitly states what "orcs" are, leaving it up to interpretation. In his stories, Tolkien does not mention any reptiles at all; Instead, the orcs are completely humanoid and lack any notable physical characteristics that might suggest that they are reptiles. In the tabletop role-playing game "Dungeons and Dragons," one of the most famous and iconic depictions of lizardfolk can be found: In Dungeons and Dragons, the lizardpeople are the primary monster that can be fought or allied with. They can take the form of the basic tribal culture, the lizardfolk, or the slightly more intelligent and sophisticated reptilian saurials. Both are portrayed as iconic adversaries as primitive, scale-covered humanoids. Today, lizardfolk continue to play a significant role in the fantasy genre. They are frequently depicted as living in small tribes with primitive beliefs and harsh legal systems. They are frequently associated with environments that are milky and dark, and they are often thought to be a cross between reptiles and mammals. The significance of lizardfolk in fantasy literature and gaming, as well as in our own cultural imagination, cannot be overstated, despite the fact that they are largely regarded as biological oddities and monsters.

Can I use the random lizardfolk names that this tool creates?

How many ideas can I generate with this Lizardfolk Name Generator?

The Lizardfolk Name Generator can generate thousands of ideas for your project, so feel free to keep clicking and at the end use the handy copy feature to export your lizardfolk names to a text editor of your choice. Enjoy!

What are good lizardfolk names?

There's thousands of random lizardfolk names in this generator. Here are some samples to start: