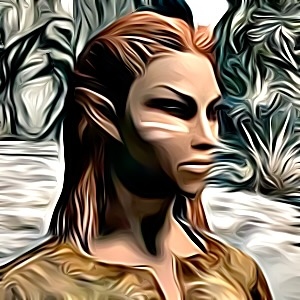 Use this Wood Elf Name Generator to find countless random Wood Elf names for your next gaming adventure, story or any other kind of project. Enjoy!

Where do Tamriel's Wood Elves come from?

The wood elves, or Bosmer, are one of the elven races that inhabit the continent of Tamriel. They are native to the province of Valenwood, which is located south of Cyrodiil and west of Elsweyr. The Bosmer are a wild and hardy people, known for their skill in archery and their love of nature.

The Bosmer were once a nomadic people who roamed the forests of Valenwood, living in harmony with the animals and plants around them. However, over time they began to settle down in villages and build cities among the trees. The Bosmer have always been closely allied with the Khajiit of Elsweyr, and together they have fought off many invasions from the neighboring provinces.

What are Bosmer good at?

Wood elves are known for their stealth and agility. They are quick and light on their feet, making them difficult to catch. Wood elves are also excellent archers. They have keen eyesight and can shoot an arrow with precision.

Wood elves make great scouts and spies. Their ability to move silently and undetected makes them ideal for this role. They are also very good at tracking people and animals. Wood elves have a deep connection with nature, which gives them an advantage when it comes to understanding the natural world around them.

A history of Wood Elves

Since the beginning of time, stories and legends have included wood elves. They have been around for as long as anyone can remember, and they are referred to by various regional names. Wood Elves were typically mischievous creatures that roamed the world's forests and groves, according to traditional folklore. They were frequently referred to as tiny trickster-like creatures that thrived on land alone. These creatures were typically depicted as having a special understanding of their surroundings and an affinity for animals and plants. The Wood Elves were referred to by the ancient Greeks and Romans as tiny sprites that safeguarded the forests from harm. Greeks believed that the Wood Elves could use the power of the plants and herbs found in the woods to heal those who were hurt. It was believed that Wood Elves were creative because they frequently constructed intricate structures and magical objects from materials found in the surrounding environment. These creatures were depicted in numerous medieval tales as residing in intricate groves with foliage-built homes and bridges. Additionally, it was believed that the Wood Elves had a unique capacity for communicating with animals and plants. Regardless of culture or era, the Wood Elves have maintained a relatively consistent image. They are still credited with a strong connection to the natural world, whether they are nymphs, fairies, or sprites. Wood Elves appear in a lot of popular fantasy and videogames, as well as in a lot of literary works. The "Wood-elves" of Tolkien's Elven Forest of Mirkwood provide a powerful representation of elves living among nature. In the Elder Scrolls universe, the Wood Elves are another significant example of this archetype. In recent times, Wood Elves have become more concerned with the environment. These creatures, who are thought to be guardians of forests and everything in them, have evolved into an essential component of the natural world and its preservation in the modern era. Wood Elves still evoke images of the mythical and magical creature of old, despite their modern connotations. Wood Elves have long been a part of fantasy and folklore, appearing in everything from ancient Greek myths to video games today. These creatures present an image of the captivating beauty, enchantment, and mystery that has never left us.

5 questions to help you come up with Wood Elf names

Can I use the random Wood Elf names that this tool creates?

How many ideas can I generate with this Wood Elf Name Generator?

The Wood Elf Name Generator can generate thousands of ideas for your project, so feel free to keep clicking and at the end use the handy copy feature to export your Wood Elf names to a text editor of your choice. Enjoy!

What are good Wood Elf names?

There's thousands of random Wood Elf names in this generator. Here are some samples to start:

More on Wood Elf names across the web