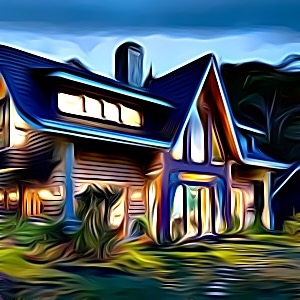 Use this House Name Generator to find countless random house names for your next gaming adventure, story or any other kind of project. Enjoy!

When did people start building houses?

Why are houses named?

There are a few reasons why people name their houses. For some, it's a way to make their home feel more like a personal space. Naming your house can also be seen as a way to show pride in ownership. It can also be used as a form of marketing, to help sell the property more easily.

Some people believe that naming your house gives it a personality and makes it more inviting. A study done in the UK found that 75% of people would be more likely to buy a property if it had a name.

Naming your house can also be seen as a way to pay homage to someone or something important to you. For example, many people name their houses after family members or friends. Others might choose to name their house after their favorite vacation spot or place of origin.

A history of houses

People have sought shelter in many different ways throughout human history. This was done in some cases in caves, while others may have constructed a shelter out of sticks and stones or other natural materials. In any case, people needed to shield themselves from the outside world and defend themselves from intruders. As a consequence of this, the idea of a house has evolved into a fundamental component of civilization and can be found in nearly every contemporary culture in the world today. The megalithic stone structure in Turkey, which dates back to approximately 8500 BCE, is the oldest known building. Houses have been around for thousands of years. More sophisticated dwellings began to appear as early humans settled down and began farming. Between 5500 and 3200 BCE, a house from Inner China is the earliest known structure. Wood and wattle-and-daub, a combination of sticks, mud, and dung used for insulation and weatherproofing, were used to build these homes. Fortifications were built as the need to secure and safeguard a home grew in importance over time. Casting besiegement walls around a town, for instance, became commonplace in the Middle Ages. Features such as crenellations, hoards, murderes, drawbridges, and barbicans are common in the design of the walls. In medieval Europe, drawbridges, gatehouses, underground dungeons, and massive castles with multiple stories began to appear. The lords and nobility of the time needed these structures for safety. Manors with a great hall, kitchen, solar (a room for the lord's family), bedrooms, and chapel were typically built by wealthy families. The architectural style began to change as the Renaissance took hold in Italy. The neohumanist style of architecture was developed as a result of the emphasis on art, symmetry, and elegance. Grand homes were built in this style with classical features like Corinthian columns, triangle pediments, and embossed bills. The new styles were then combined with Gothic architecture to create buildings like Buckingham Palace, the Palace of Versailles, and the Château de Chambord as this style spread to other parts of Europe, including France and England. Houses have developed over time to better accommodate their owners. This is evident in the numerous housing options that are currently available, including apartment buildings, townhouses, condominiums, single-family homes, and so on. As residents strive for more space, energy efficiency, and comfort, each of these distinct types of housing has undergone alterations over time. The house of today has undergone further expansion and transformation as additional features like automated appliances and home automation have become commonplace. It should not come as a surprise that the house has played such an important role in civilization and culture given that shelter has always been a fundamental need. The history of the house is long and fascinating, ranging from ancient dwellings to modern construction marvels.

5 questions to help you come up with house names

Can I use the random house names that this tool creates?

How many ideas can I generate with this House Name Generator?

The House Name Generator can generate thousands of ideas for your project, so feel free to keep clicking and at the end use the handy copy feature to export your house names to a text editor of your choice. Enjoy!

What are good house names?

There's thousands of random house names in this generator. Here are some samples to start:

More on house names across the web

Can't get enough of generating house names? Then continue exploring: