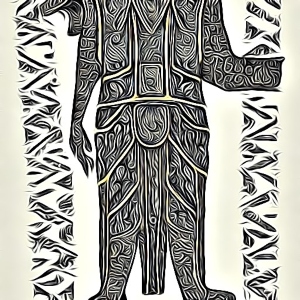 Use this Babylonian Name Generator to find countless random Babylonian names for your next gaming adventure, story or any other kind of project. Enjoy!

What is the importance of names in Babylonian culture?

Babylonian names played an important role in Babylonian culture. They were used to identify people, possessions, places, and events. Each name had a specific meaning that was used in everyday life. Families often passed down their Babylonian names to their children. This tradition helped to keep families connected and strengthened the community.

A history of Babylonian culture

Babylon's rich culture and history drove Mesopotamian civilization for more than 3,000 years. In just a few hundred years, Ancient Babylon, which was first established around 2300 BC, became one of the most powerful cities in the region. It was in the center of Mesopotamia's Fertile Crescent, right along the Euphrates River, in modern-day Iraq. Although it was influenced by a variety of neighboring civilizations, Babylonian culture was distinct in its own right. Babylonians created mathematics and some of the earliest forms of written communication. Astronomy, philosophy, and religion puzzled them. The kings of Babylon saw themselves as the gods' substitutes. In an effort to get closer to the gods, they constructed ziggurats—a series of terraces that gradually receded. Before making public pronouncements regarding matters pertaining to the state, kings frequently sought divine approval. The Epic of Gilgamesh is just one of many well-known works they produced. This poem tells the story of a man who lived in Uruk and had superhuman strength and wisdom. He had many adventures, and at the end of them, he got immortality, which was his ultimate goal. Hammurabi, the most well-known Babylonian scholar, is best known for codifying Babylonian laws and other accomplishments. The Code of Hammurabi, the earliest complete set of laws that established rights and responsibilities for both subjugated and ruling peoples, is what made Hammurabi famous. A highly developed system of weights and measures developed by the Babylonians is still in use in some parts of the world today. The Hanging Gardens of Babylon, one of the Seven Wonders of the Ancient World, was made possible by a number of sophisticated engineering principles and cutting-edge building techniques that they developed. In 539 BC, Cyrus the Great conquered Babylon and ruled it for two centuries under Persian rule. Many Babylonian customs were incorporated into Persian culture at this time. The culture of Babylon had a lasting impact on the Middle East and beyond. Even though the Babylonians' culture and accomplishments were not as impressive as those of the ancient Greeks and Romans, they laid the groundwork for numerous works that would later make significant advancements in the fields of music, mathematics, science, and art. Stories and epics that eventually reached Europe carried a lot of their knowledge from the Middle East to Europe. As a result, a few individuals who bridged the gap between the ancient and modern owe the knowledge of Babylon's ancient history and culture to millions of people worldwide. The technological and cultural landscape of the world we know today was shaped by the amazing culture, monuments, and accomplishments of these people.

5 questions to help you come up with Babylonian names

Can I use the random Babylonian names that this tool creates?

How many ideas can I generate with this Babylonian Name Generator?

The Babylonian Name Generator can generate thousands of ideas for your project, so feel free to keep clicking and at the end use the handy copy feature to export your Babylonian names to a text editor of your choice. Enjoy!

What are good Babylonian names?

There's thousands of random Babylonian names in this generator. Here are some samples to start:

More on Babylonian names across the web

Can't get enough of generating Babylonian names? Then continue exploring: