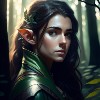 Use this Ranger Name Generator to find countless random ranger names for your next gaming adventure, story or any other kind of project. Enjoy!

How are rangers depicted in fantasy stories?

Rangers are often depicted as loners who are at home in the wilderness. They are skilled hunters and trackers, and are often able to move through the woods without making a sound. Rangers are usually loyal to their friends and allies, but they can be quick to anger if they feel betrayed. In some stories, rangers have magical abilities that help them to survive in the wild.

How does one become a ranger?

Rangers are a special breed of warrior, adept at surviving in the wild and striking quickly and silently against their foes. They are often members of elite military units, tasked with scouting ahead of the main force and engaging in hit-and-run attacks against enemy targets.

Becoming a ranger is not for the faint of heart. It requires years of training and experience to master the skills needed to survive in the wilderness and fight effectively against enemies. Rangers must be able to track down their quarry, using both their keen eyesight and tracking ability, as well as their knowledge of the terrain. They must also be skilled in stealth and able to move quietly through the forest without being detected.

If you have what it takes to become a ranger, then you will find yourself in a rewarding career that offers excitement, adventure, and danger.

A history of rangers

Rangers Football Club, one of Scotland's most well-known sports teams, was founded in 1873. Before changing its name to Rangers FC in 1876, the team used to be known as the Highland Light Infantry's fourteenth battalion. The team has since expanded in size and stature to become one of the most well-known names in international football. At Flesher's Haugh, a Glasgow, Scotland, playing field near the River Clyde, the very first Rangers team sat. At a meeting on December 4, 1872, it was decided that the team should be called "the Rangers." The team initially concentrated primarily on playing friendly matches against other local teams; However, the team quickly began competing in regional and national tournaments. Since the team's inception, Rangers has dominated the Scottish Premier League in Britain. Rangers won their first Scottish Cup in 1893, their first League title in 1897, and their first major milestone. By the time the First World War was over, the team had won nine Championships, ten Cups, and three League Cups, making it a dominant force in the early 20th century. The number of supporters also increased with the success of the team. Rangers had attracted a large and devoted following by 1914, and in April of that year, they became the first Scottish football team to establish a Supporters' Club. Midway through the 20th century, Rangers' legacy continued to grow, and the team even made a successful entry into European football. The Rangers went on to win a total of five European Championship Cups, eleven League Cups, and nine League titles during the period that was referred to as the "golden age." The fierce rivalry between Rangers and Celtic, their cross-town rivals, was another factor that contributed to their legendary status. Since its inception around the turn of the century, this rivalry, also known as the "Old Firm," has been a part of British football. Rangers have remained a formidable force in Scottish football and have evolved into something of an institution, despite a few setbacks in the middle of the season. Since the team's inception, they have participated in every Scottish Premier League season and even had the honor of representing Scotland in international competitions. Steven Gerrard is in charge of the Rangers right now, and while they keep their commitment to the sport's long and illustrious past, they continue to cultivate exciting new players. Rangers are lauded not only for the numerous tournaments and championships they have won, but also for the passion and dedication of their fans, who remember the club's proud past and look forward to an even brighter future.

5 questions to help you come up with ranger names

Can I use the random ranger names that this tool creates?

How many ideas can I generate with this Ranger Name Generator?

The Ranger Name Generator can generate thousands of ideas for your project, so feel free to keep clicking and at the end use the handy copy feature to export your ranger names to a text editor of your choice. Enjoy!

What are good ranger names?

There's thousands of random ranger names in this generator. Here are some samples to start: