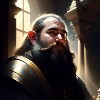 Use this Cleric Name Generator to find countless random cleric names for your next gaming adventure, story or any other kind of project. Enjoy!

What role do clerics play in fantasy worlds?

Clerics play an important role in fantasy worlds as religious leaders. They often have a deep understanding of the history and mythology of their world and are able to offer guidance to others. Clerics are usually skilled in diplomacy and can be called upon to resolve conflicts. They may also have access to powerful magic, which they can use to protect their followers or vanquish their enemies.

What kind of magic does a cleric use?

A cleric is a divine spellcaster who channels the power of their deity to cast spells. Clerics can be of any alignment, but most are aligned with the same alignment as their deity. The type of magic a cleric uses is determined by their deity.

Clerics also have access to domain spells, which are extra spells granted by their deity that supplement the cleric’s spell list.

Can I use the random cleric names that this tool creates?

How many ideas can I generate with this Cleric Name Generator?

The Cleric Name Generator can generate thousands of ideas for your project, so feel free to keep clicking and at the end use the handy copy feature to export your cleric names to a text editor of your choice. Enjoy!

What are good cleric names?

There's thousands of random cleric names in this generator. Here are some samples to start: