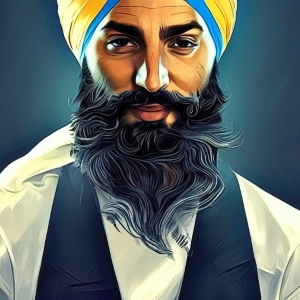 Use this Sikh Name Generator to find countless random Sikh names for your next gaming adventure, story or any other kind of project. Enjoy!

What is the importance of names in Sikh culture?

Sikhism is a monotheistic religion that originated in the Punjab region of North India. Sikh names are very important in Sikh culture because they reflect the individual's spiritual journey and beliefs. A Sikh's name reflects their lineage, occupation, and personality traits. Each Sikh has at least one formal name and one religious name. The formal name is usually used when a person goes outside of the Sikh community, while the religious name is used when interacting with other Sikhs or during services.

A history of Sikh culture

The first Guru, Guru Nanak Dev, laid the groundwork for Sikh culture, which has its origins in India from the 15th century. Sikhism has grown to become the fifth most popular religion in the world over the years. It emphasizes the practice of compassion, justice, and equality in addition to devotion to a single, formless deity. The Sikh faith has been able to withstand strong external pressures thanks to its dedication to social harmony and universal justice. The Sikh religion's founder, Guru Nanak Dev, was born in what is now Pakistan in 1469. He was a vocal opponent of superstitions and casteism that were widespread in that time period. His teachings, which stressed truth, equality, and justice, quickly spread throughout India and evolved into the religion that would later be referred to as Sikhism. The three fundamental tenets of Sikhism were established by Guru Angad Dev and Nanak dev in the early years of Sikhism: worship, sharing of wealth, and remembering a single God; and adhering to the ten Sikh Gurus' teachings. The Sikh faith established its place in Indian culture following the tenth Guru, Guru Gobind Singh. Guru Gobind Singh said that the Sikhs of India would form an army to fight oppressive regimes. This army would be known as the "Khalsa," and its members would be five volunteers known as "Panj Pyaras." Sikh culture underwent significant westernization and widespread expansion during the modern period, which is also referred to as the British Raj era. During the Fourth Anglo-Afghan War, the Punjabi Sikhs fought alongside the British against the Afghans. After this military alliance, western farming methods were introduced, increasing the cultivation of wheat, sugar, and vegetables in Punjab. In addition, during this time, Sikh abolitionists fought against the barbaric and inhumane practices of Thuggee and held a number of meetings to discuss ways to end this form of tyranny. Sikhs' global expansion in the 20th century brought the religion to the attention of the entire world. Sikh organizations in the form of airlines, hospitals, universities, and others began to emerge outside of India. The Sikhs began to be recognized as a religious community with the right to vote and freedom of expression by major nations like Canada and the United States. Through contributions like poetry and art, Sikh philosophy and art also reached out to other nations and cultures during this time. Sikhism has over the years welcomed people from a wide range of religious and cultural backgrounds. It propagates a message of equality, compassion, and inclusion. The Sikh community and its culture of striving for the common good and justice have greatly benefited from the Sikh Gurus' teachings. While Sikhism's long history is frequently mentioned, its current relevance and significance cannot be overstated.

5 questions to help you come up with Sikh names

Can I use the random Sikh names that this tool creates?

How many ideas can I generate with this Sikh Name Generator?

The Sikh Name Generator can generate thousands of ideas for your project, so feel free to keep clicking and at the end use the handy copy feature to export your Sikh names to a text editor of your choice. Enjoy!

What are good Sikh names?

There's thousands of random Sikh names in this generator. Here are some samples to start: