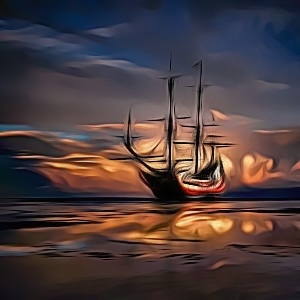 Use this Pirate Ship Name Generator to find countless random pirate ship names for your next gaming adventure, story or any other kind of project. Enjoy!

Why should you use a pirate ship name generator?

Whether you’re playing a round of Puzzle Pirates or getting ready for your next pirate story, a pirate is nowhere without his or her ship. A ship that doesn’t only look fearsome, but which carries a name that instills a deep terror in your enemies. That, or a hearty chuckle, depending on what you’re going for. Writer’s block strikes everyone sooner or later, so use the pirate ship name generator to create thousands of possible names to use, or to simply find some inspiration.

Why do ships have names anyway?

If you’ve run into any kind of seafaring vessel other than a rowing boat, you definitely noticed the name. This is a centuries-old tradition that serves one primary purpose: communication. Especially in the old days, when radio communication between different ships was not possible yet, sailors, dock workers and authorities could only identify friendly and not-so-friendly ships by their unique names.

The practice of naming also serves a secondary purpose. Men (and sometimes women) live on ships for long periods of time. A ship is like home, and attaching a name to it provides a strong emotional bond between its occupants. This rang true in the old seafaring days, and still rings true today.

Traditionally, a ship needs to be named before it is launched. Failing to do so is believed to bring bad luck, an unfortunate thing to carry with you at sea.

Why are ship names often feminine?

Very often you’ll find that ships are named after women. This pirate ship name generator also has a high likelihood of returning female names. Although the origins of this tradition are not 100% clear, most likely early ships were named after goddesses. This belief in divine protection faded over time, and the names shifted to those of important historical female figures and significant women in a captain’s life.

A history of pirate ships

Pirate ships have been around since the early 1600s. Pirates have used a variety of ships over the centuries to pillage and steal from merchant ships, coastal towns, and innocent victims. Every ship, from tiny sloops to massive frigates and galleons, was as distinctive as the pirate who ran it. Small 14-gun sloops were typically the earliest pirate ships, such as those led by Captain Henry Every and William Kidd. Sloops were able to sneak into ports and smuggle goods because they were relatively quick, easy to sail, and had a shallow draft. The pirates were able to quickly sail against merchant ships and outrun pursuers thanks to this ship design, which proved to be highly maneuverable in challenging conditions. The larger galleons and frigates that followed were the next type of pirate ship. These ships had a lot more power, could carry heavier weapons, and could carry larger crews. Sailors, particularly in the Caribbean, became envious of these warships' size and firepower. Famous pirates like Edward Teach, who was also known as Blackbeard, and Bartholomew Roberts were in charge of ships like the Queen Anne's Revenge and Royal Fortune, which had a lot of artillery. The schooner was the ship of choice for pirates at the end of the 1700s. Although smaller than a galleon or frigate, the schooner had more firepower than a sloop. The schooner's quickness and agility made it possible for pirates to maneuver through shallow waters and swiftly overtake merchant vessels. Pirates were able to quickly adapt to new strategies because the schooner was much simpler to repair than a larger vessel. The brig was the last of the classic pirate ships to appear. Despite being smaller than a galleon, the brig was larger than a schooner. It was still manageable for a crew of only a few men due to its size, which allowed for a sufficient amount of armament for pirate operations. Most importantly, the square-rigged sails and two masts on a brig made it easy to escape from pursuers and move quickly between ports. The story of pirate ships' ingenuity and adaptability is fascinating. Each pirate ship was tailored to the tactics and strategies of its captain, from Henry Every's small sloop to Blackbeard's massive galleon. There were no two identical pirate ships, and each one exemplified the distinctive style and flair of its captain.

5 questions to help you come up with pirate ship names

Can I use the random pirate ship names that this tool creates?

How many ideas can I generate with this Pirate Ship Name Generator?

The Pirate Ship Name Generator can generate thousands of ideas for your project, so feel free to keep clicking and at the end use the handy copy feature to export your pirate ship names to a text editor of your choice. Enjoy!

What are good pirate ship names?

There's thousands of random pirate ship names in this generator. Here are some samples to start:

More on pirate ship names across the web