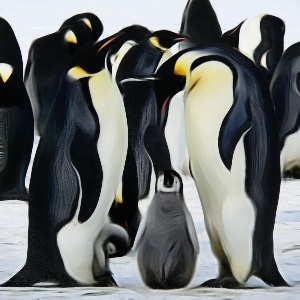 Use this Penguin Name Generator to find countless random penguin names for your next gaming adventure, story or any other kind of project. Enjoy!

What kind of animal is a penguin?

A penguin is a bird that cannot fly. Penguins are native to the Southern Hemisphere and can be found near the poles. There are seventeen different species of penguins, all of which live in cold climates. Penguins eat fish and other marine animals. They have black and white feathers and a layer of fat that helps keep them warm in the water.

A history of penguins

Although penguins have been a beloved Antarctic animal for centuries, little is known about their true history. Penguins have evolved over a long and fascinating time, finely adapted to the icy environments of the coldest continent. To learn more about these amazing creatures, the history of penguins will be examined in this article. During the late Paleocene and early Eocene epochs, the penguin species made their first appearance more than 60 million years ago. Fossil evidence suggests that, with the exception of having shorter and thinner bills, these ancient birds were similar to the rockhopper that we know today. Their closest relatives, like the great auk, started to die out during this time. It is believed that penguins were able to adapt to shifting sea levels and temperatures, allowing them to survive, as the world experienced a number of climatic shifts. Around 25 million years ago, the modern penguins we know today began to become more diverse. They started moving south, adjusting to their cold habitats and searching for food in warmer waters, according to fossils found. Since then, penguins have developed into a number of distinct spans, each with its own characteristics and behaviors. The Emperor penguin is the most unusual species of penguin. It is able to successfully breed in extremely cold conditions thanks to its distinctive courtship and breeding behaviors. Since ancient times, penguins have also been a part of human culture. These birds, which are frequently depicted in literature, art, and myth, have always been a part of our lives. Penguins were portrayed as messenger birds sent by the gods in ancient Greek mythology, while they were frequently depicted as images of wisdom and truth in medieval European art. In recent times, stories, cartoons, toys, and video games have made them popular. Due to both natural factors like climate change and human activities like hunting and pollution, the number of penguin species is declining today. 18 species of penguins were classified as "Near Threatened" or "Vulnerable" by the International Union for Conservation of Nature (IUCN), indicating that they are in danger of extinction. This is a major concern because these birds are so integral to their environment that a decline in their population could have a significant impact on their habitat. Penguins have a long and illustrious history that spans millions of years. By looking at the various species, how they developed, and how humans have affected them, we can learn a lot about these one-of-a-kind and beloved birds. We have an obligation to ensure that these birds continue to thrive by reducing pollution, reducing hunting, and other conservation efforts to preserve their environment. Penguins may eventually become extinct without our assistance, denying us and future generations their beauty and splendor.

5 questions to help you come up with penguin names

Can I use the random penguin names that this tool creates?

How many ideas can I generate with this Penguin Name Generator?

The Penguin Name Generator can generate thousands of ideas for your project, so feel free to keep clicking and at the end use the handy copy feature to export your penguin names to a text editor of your choice. Enjoy!

What are good penguin names?

There's thousands of random penguin names in this generator. Here are some samples to start: