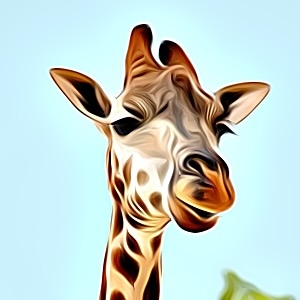 Use this Giraffe Name Generator to find countless random giraffe names for your next gaming adventure, story or any other kind of project. Enjoy!

What kind of animal is a giraffe?

A giraffe is a mammal of the family Giraffidae, along with its close relative, the okapi. The two species are the only living members of the Giraffidae family. The giraffe's closest living relatives are deer and cattle.

The giraffe is distinguished by its long neck, legs, and horn-like ossicones on its head. It stands 5–6 m (16–20 ft) tall at the shoulder.

A history of giraffes

The highest terrestrial animal, giraffes, have existed for thousands of years. Since the time of the ancient Egyptians, it is thought that they have been the main attraction in places like Europe and ancient Egypt. They have long been regarded as a symbol of wisdom and strength, and they have been the subject of numerous works of literature and art. So, it's not surprising that giraffes have a long and colorful history. Okapi and zebra are the giraffe's closest living relatives. The Miocene Epoch, which is roughly 5 to 15 million years ago, is when the earliest fossil evidence of these animals can be found. Giraffes are thought to have evolved from a common ancestor with these other animals. It is believed that the giraffe's long neck evolved during this time to enable the animal to feed from higher branches of trees. Africa has been home to the giraffe for the majority of its history. They are thought to have spread from the Horn of Africa region to other parts of the continent as they were hunted or moved by migratory humans. Giraffes first appeared in art and literature in the Middle Ages, beginning in the 12th century. In illuminated manuscripts, tapestries, and frescoes from all over Europe, giraffes are depicted. Giraffes began to be sought after for zoological collections in the 1500s. A growing number of Europeans began keeping giraffes as pets in the 1600s. In addition, by the 1700s, giraffes were the main attraction at zoos, including those owned by the Tsars of Russia and the Habsburgs. The animal was also frequently depicted in paintings by Rubens and Rembrandt, who produced dozens of them. The species began to decline in the 1800s and 1900s. The giraffe population steadily decreased as a result of illegal hunting and habitat destruction. As a result, wildlife preserves and conservation efforts spread across Africa. The giraffe population is still declining today, but conservation efforts are contributing to its recovery. The giraffe has a fascinating and lengthy history. The admiration it has received from people all over the world can be seen in its placement in literature and art. Fortunately, it is still studied and protected today, allowing us to enjoy this majestic animal for many years to come.

Can I use the random giraffe names that this tool creates?

How many ideas can I generate with this Giraffe Name Generator?

The Giraffe Name Generator can generate thousands of ideas for your project, so feel free to keep clicking and at the end use the handy copy feature to export your giraffe names to a text editor of your choice. Enjoy!

What are good giraffe names?

There's thousands of random giraffe names in this generator. Here are some samples to start: