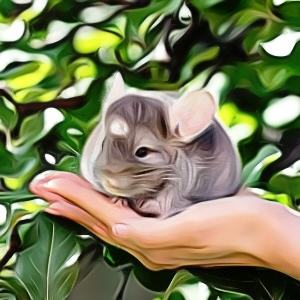 Use this Chinchilla Name Generator to find countless random chinchilla names for your next gaming adventure, story or any other kind of project. Enjoy!

What kind of animal is a chinchilla?

Chinchillas are small, rodent-like animals that are native to South America. They have thick fur that is often used for making clothing and other items. Chinchillas are also popular pets, and they are known for being playful and active.

A history of chinchillas

The humble chinchilla has existed for thousands of years, with its earliest known ancestor occurring approximately five million years ago during the Pliocene period. It is believed that these distant relatives lived in the mountain ranges of the Andes in South America and were the size of a large rabbit. Spanish conquistadors who saw the tiny rodents while traveling through the Chincha Valley in the early 16th century were the first to write about them. The Chincha Indians referred to the furry animals as Chinchilla rats, which is how the chinchilla got its name. During the fur trade in the 1700s, native chinchillas were hunted for their fur, resulting in a significant population decline due to their lack of protection. The wild chinchilla population didn't start to recover until the late 1880s, when wealthy families in Chile and Bolivia started breeding chinchillas in captivity. Mathias Chapman, a successful American businessman, decided in 1923 to bring some of the endangered chinchillas back to the United States for breeding purposes. He brought seven pairs of chinchillas from Chile and Bolivia to his ranch in California a few years later, in 1929. He wanted to breed the animals in captivity and use their fur to make rare and high-quality fur coats. Chapman's breeding methods worked for a while, and the chinchillas started to do well in captivity. Chapman began selling captive-bred chinchillas to fur traders in the late 1940s when their population had grown sufficiently. Chinchilla fur was also in high demand over the past few decades as the market for high-end fur goods expanded. However, due to the animal's endangered status, commercial harvesting of wild chinchillas has largely been stopped. Today, almost all chinchilla fur comes from captive-bred animals. Due to their ability to bond strongly with their owners, chinchillas have become increasingly popular as pets in numerous nations. These small rodents are very social creatures, and their owners frequently consider them companion animals. It is now possible to purchase domesticated chinchillas and even specific breeds of the animals due to their popularity as pets. In conclusion, human activity has had a significant impact on the chinchilla population, which is a species with a long history. The domesticated chinchilla trade is still going strong, making the animals a viable commodity, despite the fact that most of the wild chinchilla fur trade is done with. Chinchillas can thrive in the wild or in captivity if they are given the appropriate care.

Can I use the random chinchilla names that this tool creates?

How many ideas can I generate with this Chinchilla Name Generator?

The Chinchilla Name Generator can generate thousands of ideas for your project, so feel free to keep clicking and at the end use the handy copy feature to export your chinchilla names to a text editor of your choice. Enjoy!

What are good chinchilla names?

There's thousands of random chinchilla names in this generator. Here are some samples to start: