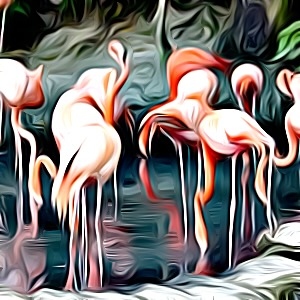 Use this Flamingo Name Generator to find countless random flamingo names for your next gaming adventure, story or any other kind of project. Enjoy!

What kind of animal is a flamingo?

A flamingo is a type of bird that is often thought of as a symbol of the tropics. They are usually a pink or orange color, and they have long necks and legs. Flamingos typically eat shrimp, algae, and other small aquatic creatures. They live in warm climates near bodies of water such as lakes, rivers, and swamps.

A history of flamingos

Flamingos have a fascinating history. These colorful, exotic birds have been around for millions of years and have been depicted in mythology and art across cultures. They have dazzled and awed people for centuries with their grace and beauty. The Latin word "flamma," which means "flame," is where the name "flamingo" comes from. The flamingo's bright pink and orange feathers, which appear to be burning in the sun, are probably to blame for this. Throughout history, flamingos have also earned a reputation for their graceful posture, in which they stand with their heads pointing back and their legs pointing sideways to form a bow. The 18th dynasty of ancient Egypt, when there were numerous wall paintings depicting flamingos, provides the earliest account of the flamingo. This suggests that the wealthy kept flamingos in captivity and treated them like pets. This would explain why flamingos were also given to visiting foreign dignitaries during the Pharaohs' reign. During his travels through the Americas, the Spanish explorer Ferdinand Magellan was the first to bring flamingos back to Europe. The people of Tierra del Fuego gave him a live flamingo as a present. Despite the fact that they were rarely seen in the wild, the flamingo gained a lot of popularity in Europe after the Spanish explorer brought it back. Due to its magnificent appearance and graceful posture, the flamingo became a popular symbol of luxury and beauty by the late 19th century. It was played in casinos, nightclubs, and small summer houses all over the United States. A large number of flamingos began to appear in the Caribbean Islands, including Cuba and the Bahamas, in the 1920s and 1930s. Flamingos became a popular fashion and decor symbol throughout the 20th century, appearing in advertisements, clothing stores, and magazines. They also became painters' and photographers' favorite subjects, and their stunning beauty is depicted in artwork all over the world. But flamingos aren't just pretty decorations; these remarkable birds were also used in religious ceremonies in the past. The Pharaohs of ancient Egypt were of the opinion that flamingos could foretell the future and served as a messenger between the gods and the Earth. Additionally, flamingos were regarded with reverence and respect in the indigenous religions of South America because they represented the sun. Many people still adore and admire flamingos today, and they continue to be prominently featured in art and fashion. Additionally, the flamingo continues to be a potent representation of grace, beauty, and mystery.

Can I use the random flamingo names that this tool creates?

How many ideas can I generate with this Flamingo Name Generator?

The Flamingo Name Generator can generate thousands of ideas for your project, so feel free to keep clicking and at the end use the handy copy feature to export your flamingo names to a text editor of your choice. Enjoy!

What are good flamingo names?

There's thousands of random flamingo names in this generator. Here are some samples to start: